The article we wrote for the architecture magazine SAN ROCCO 5 is published: “SCARY ARCHITECTS”.You can buy it here and have a preview of some other articles here–  Die Architektin (Verein für) ! wrote a small article on architecture and discrimination.

The article is called Architecture, gender and disaster- Why Zaha Hadid is scary. Here is the introduction:

” If one is to believe the statistics, the architectural profession is undergoing a major regression: the number of women registered as practitioners in the UK has dropped from 28% in 2009 to 21% this year.1 Only 8% of UK architecture offices are headed by a female principal. On the academic front, a pathetic 8.06% of women hold professorships in the prestigious Architecture Department of the ETH Zurich,2 a school that claims to be promoting the academic advancement of women. In Switzerland, a mere 9.8% of women registered as independent practitioners (Swiss Society of Engineers and Architects, 2010). Zaha Hadid is the only woman to have won the Pritzker Prize, for Kazuyo Sejima had to share the award with Ryue Nishizawa. While Hadid’s status is truly an inspiration for other women architects as well as for women in general, we really can’t see the forest for the trees. Hadid is alarming, and not because of her looks: she is alarming because she is the only one to have reached that level of success. It is high time that we attack the enraging passivity of the entire architectural discipline.” 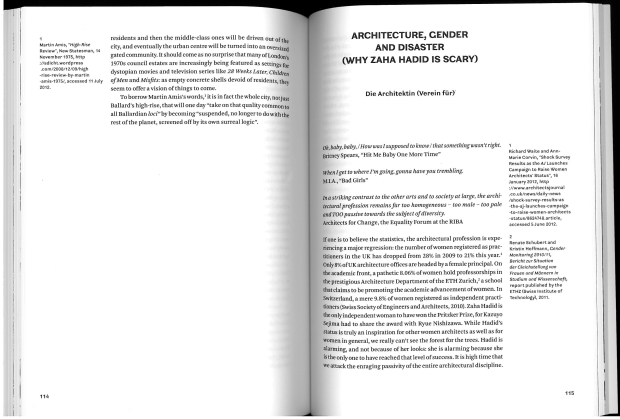 One thought on “Architecture, gender and disaster”