Ladies of the 2014 Architecture Biennale: Modernity? Where?

In the crowds of the opening days of the Architecture Biennale 2014, there was as many women than men. Girls, mature women, students, interns, curators, visitors, panelists, it was not an engineer fair.  Yet, nearly all the official openings, the podiums and the speaker pods, the line-ups of the discussion panels and the names on top of the curating credits shields were overwhelmingly male.

Let’s ignore the content -yes, let’s dare to do that, and superficially, stupidly, primitively, do the gender body count.

Solely focusing on the very formal, easy-to-criticize,  question of presence and female representation in architecture, this is THE event where to look for  role-models, powerful architects, and women that have things to say, provide one let them speak. Unfortunately, what we saw and see at the 14th International Architecture Exhibition of la Biennale di Venezia is nothing close to new, progressive or innovative in the matter but as old and depressing as an antique window collection, as sad as a fake ceiling and disappointing as a line of toilet bowls.

Going through the official events, while the German Pavilion opening was a sad moment with the only woman on the podium a photographer in a leopard dress, and the Danish Pavilion panel  not honoring the gender equal reputation of Scandinavian countries, not to mention the fundamentals panels- with a 2/8 speakers ( one of them Azzurra Muzzonigro),  our special mention must go to the discussion table of the US pavilion, with Felicity Scott, Keller Easterling, Eva Franch i Gallibert, and guests, for doing such a great job at women representation. This might be related to the fact that the 3 curators are female, kick-ass, brilliant people. 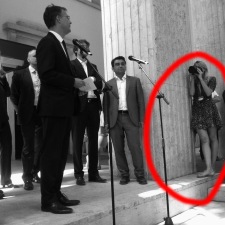 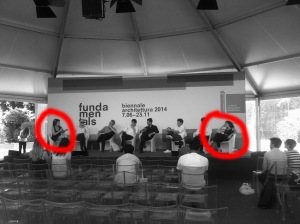 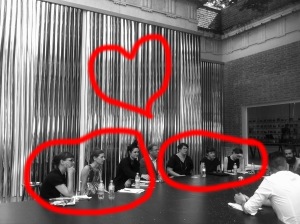 Let us go on with our tour, and with the commissioner and follow their own narrative and carrousel of prizes: The 14th International Architecture Exhibition of la Biennale di Venezia is curated by a man (R. Koolhaas, for those of you who lived on Mars in the past months). The jury was composed of Francesco Bandarin (President, Italy), Kunlé Adeyemi (Nigeria), Bregtje van der Haak (The Netherlands), Hou Hanru (China), and Mitra Khoubrou (United Arab Emirates). None of the women in the jury are architects. Van der Haak is a film director and Khoubrou is a development expert (a neo-liberal one btw), so 2/5.

The laureates of the Awards were: 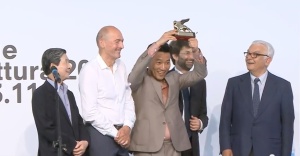 The Silver Lion for a National Participation went to Chile (Monolith Controversies), with Commissioner: Cristóbal Molina (National Council of Culture and the Arts of Chile). Curators: Pedro Alonso, Hugo Palmarola. 0/3

The Silver Lion for the best research project went to MondoItalia (Sales Oddity. Milano 2 and the Politics of Direct-to-home TV Urbanism)  went to Andrés Jaque/Office for Political Innovation: 0/1

There were 3 Special Mentions to National Participations: 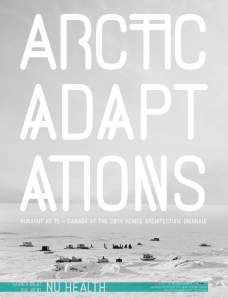 Canada and Arctic Adaptations: Nunavut at 15-
While Canada has a long list of participants, in the top list, the Deputy Commissioner is a woman: Sascha Hastings (Royal Architectural Institute of Canada) and there is a woman in the team of Curators: Lola Sheppard, Matthew Spremulli, Mason White (Lateral Office). 2/4
Hastings is a radio producer and a library specialist (?)- (not an architect) and Sheppard is a partner at Lateral Office, a firm dedicated to the productive overlap of architecture, landscape, infrastructure and urbanism, and Assistant Professor at University of Waterloo’s School of Architecture.
France Modernity: promise or menace?
There, the State was the Commissioner: Institut Français, Ministère de la Culture et de la Communication  and the Curator: Jean Louis Cohen. 0/2
Among the architects presented in the pavilion, not a single women designer (Eugène Beaudouin, Vladimir Bodiansky, Maurice Cammas, Robert Camelot, Raymond Camus, Maurice Crevel, Jacques Lagrange, Marcel Lods, Jean de Mailly, Eugène Mopin, Jean Prouvé, Charles Ricome, Jacques Tati, Louis-Bernard Zehrfuss)-

However, the pink hostess/ stewardess at the Fair  was quite lame.

There were 3 Special Mentions to research projects of the section Monditalia (part of the International Exhibition Fundamentals):

and Italian Limes
Folder 0.5/1
Finally the Golden Lion for Lifetime Achievement went  to Phyllis Lambert, founder of the Canadian Centre for Architecture, :
“Not as an architect, but as a client and custodian, Phyllis Lambert has made a huge contribution to architecture.”- Noted how the fact that she is not an architect is underlined.

So the result is without appeal 11/33: 33% of women among the awarded teams

Modernity? Modernity  refers to a post-traditional, post-medieval historical period. This period has not been reached yet by the architecture profession.

← ♀ architects of the Grisons.
Mrs. Dean: The scandal of no female leaders in architecture schools →

9 thoughts on “Ladies of the 2014 Architecture Biennale: Modernity? Where?”