Françoise-Hélène Jourda was a militant architect. She was one of the first to call for the integration of ecology  in architecture, also one claiming that architects have a social responsibility to stand for.

At a time when architecture is a lackey-service to real-estate companies and in the verge of becoming a secondary discipline in the face of world urbanization, Jourda’s call seemed all the most necessary. Jourda pleaded  for a more economical building process, reducing the use of resources and of energy.

” Françoise-Hélène Jourda’s leitmotiv for more than twenty years has been an environmental approach in the broadest sense of the term, and she has been constructing buildings without respecting conventions and stylistic preconceptions. “I am now a very happy woman”, she said as the Chairwoman of architecture and sustainable development at Vienna Technical University, “The subjects that I have been fighting for have finally become respectable”.  Françoise-Hélène Jourda believes that a building should be the result of research carried out involving everyone concerned including project management and users throughout the project design process. The final result is not the consequence of preconceptions and an isolated architect, but rather the concerted result of interrogations about local resources:  “I don’t know what my buildings will look like when I am working on them, I refuse to ask the question in stylistic terms, she says.  Preparing for a competition is a difficult experience, because perspectives have to be shown.  Consequently, the images that I present are illustrations rather than images of the building.  These illustrations tell a story.  But they are never an accurate depiction of the building.  That is impossible until all the work has been done!” Source

Her most important buildings are:

The National School of Architecture in Lyon (with her partner at the time Gilles Perraudin), a building with the first climatic double-facade in Europe. She won the Prix spécial du jury de l’Équerre d’argentin 1981 for that building. 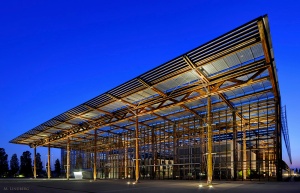 She received the Holzbaupreis in 1999 for the MONT-CENIS TRAINING CENTER, in Germany. 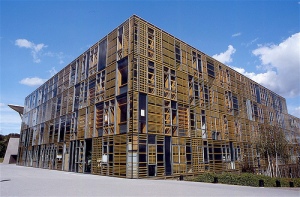 She curated the French Pavilion of the Venice Architecture Biennale in 2004, and was professor  at the TU Vienna.

and the Greenhouses of the  Bordeaux Botanical gardens (1999),and the Botanical Museum (2007), the private hospital Jean Mermoz in Lyon (2008), preservation and renovation of the Pajol hall, in Paris (2013).

here in english at the Prishtina Ecoweek URGENT

← Girls in Architecture: An overview in 2015
An Answer to Patrick Schumacher →

One thought on “Françoise-Hélène Jourda: A Socially, Ecologically Responsible Architect. (1955-2015).”