It is always so distressing to see that excellent teaching institutions which have proven to be progressive, innovative, provocative in their approaches, pedagogy and political positions, fail at basic human level. The Berlage, in line with the infamously sexist DARCH at ETH and Bartlett UCL/ DPU, among great architecture and planning schools drowning in the puddle of their own patriarchal structures, show a dramatic track record in its gender representation numbers. Hinted towards the Lecture Series page of the Berlage Sessions by an appalled colleague (thanks, E), i must admit the scope of the damage is horrifying.

The only female of the series is Jing Lui. Her lecture was inspiringly entitled ‘ To Be Determined’.

Jing Lui is co-founder of SO – IL with Florian Idenburg. “Liu currently teaches in the Advanced Architectural Degree program at Columbia University’s Graduate School of Architecture, Planning, and Preservation and at the New School of Design. She has been a lecturer, panelist and critic at universities and institutions throughout the world as an important voice from a new generation of architects. ” 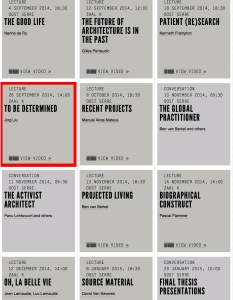 EDIT: We sent an angry email to the Berlage to notice them we were having them in our target line.

Here is their answer:

Thank you for your message and your critical article on The Berlage.
We are aware of the bad division of our autumn 2014 lecture series, which came to happen due to some last minute cancellations (of women lecturers). Even though the division of previous years has been better than the 1 out of 11 of the autumn 2014, we have tried to reach a  better division for the spring 2015 lecture series.
5 out of the 7 lectures of the spring lecture series 2015 are given by women. We are hoping to post more information on our spring series by next week.  (…)
Kind regards,
The Berlage “
Much appreciated that they actually care enough to answer, and looking forward to a better ratio!